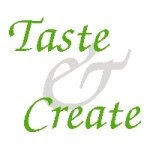 I signed up for Taste and Create for this round and was looking forward to seeing who I was paired up with because looking at the blogs of people who have participated before you can see that there are some fantastic bloggers involved! The email arrived saying who was paired with who and when I saw the name of the blog I was paired with I was initially scared because I've never really made cupcakes before, but then was really excited to be trying something new. I must have read every recipe on Cupcake Project and this one for Strawberry Cupcakes with Champagne Glaze jumped out at me straight away because I had just bought some of the start of the season's local strawberries from a local farm shop. All I needed to do was get some champagne, but instead I went for a slightly cheaper bottle of Cava which seemed to work very well. What was also fun about making cupcakes that Stef described as "perfect for celebrating valentines day" was that they got me more excited about celebrating our 1st wedding anniversary this weekend!!!

These were incredibly tasty. I loved the subtle taste of the strawberry in the cupcake itself, the texture of the crisp glaze was a fantastic contrast to the soft cupcake and the fresh strawberry on top finished it of really well with fresh sweet taste. This made about 24 cupcakes and there was no way I would be able to eat them all as well as the top tier of our wedding cake this weekend, so Rob and I had a few and I took the rest to the church to help cater for the Girls Brigade display last night. They went down a storm and people were asking if there were anymore!!!! So if you're reading this Stef be proud of your creation because it's made lots of people happy and a few even ask for the recipe! 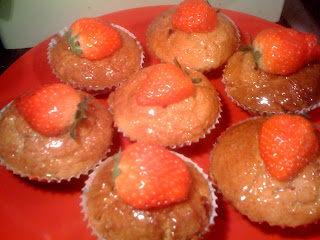 Anyways here's the recipe as Stef wrote it with my edits in italics....

Preheat oven to 350 degrees. Line two standard cupcake pans with 24 paper cupcake liners. Set aside. In a medium bowl, sift together the cake flour, baking soda and salt. Set aside.
In a large bowl, cream butter and sugar with an electric mixer. Add eggs. Mix until smooth and creamy. Add buttermilk, oil and vanilla. Mix until combined. Add flour mixture to butter mixture. Mix until just combined. Stir in strawberries. Place batter into each cupcake cup filling each half full. 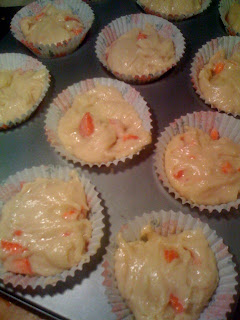 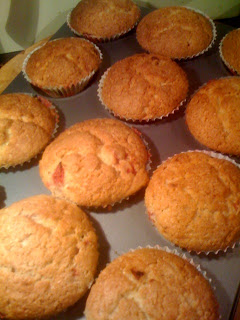 Boil butter, sugar, and water for 3 minutes. Remove from the heat. Stir in champagne and let cool.

How to Glaze a Cupcake

The trick I learned for glazing a cupcake is dip the cupcake into the pot of glaze and twist the cupcake as you take it out to keep the glaze from dripping off. Coincidentally, dip and twist sounds like a move from my new hip-hop class. I double-dipped (a restaurant faux pas) but very important here to get a nice thick layer of glaze.

Once everything cooled and dried, I topped each cupcake with a half a strawberry. While I think these are my prettiest cupcakes yet, it almost seems too easy. I didn't have to mess with piping any icing at all. Adding a strawberry seems to be the baking equivalent to taking a picture of a kid or a dog, so easy to do with almost guaranteed viewer satisfaction. 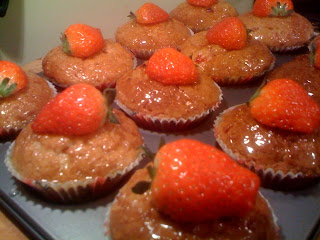 I really loved these and I'm sure I'll be doing them again and I think I might just have to try making more cupcakes now: thanks for your inspiration Stef!
Posted by Ruth Strong at 12:33