This is the third part of February's monthly triplet of recipes from magazines and next week I'll get into March's triplet.

I was caught by the photo of this recipe in the magazine, it was a blueberry cottage cheese cake but I had a bag of frozen raspberries I was dying to use so I subbed out the blueberries, but I think I may just try this sometime with blueberry because it was a great cake and fun to make. I also halved the recipe and baked in a sandwich tin instead of the 9.5" tin. I think this would be perfect with some afternoon tea sitting out in the beautiful sunshine we've been having here over the past week. 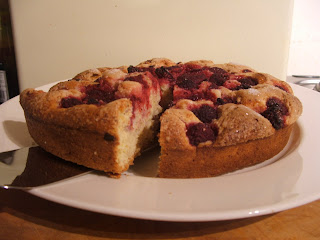 Recipe
1. Preheat oven to 180˚C and grease your cake tin.
2. Whisk the egg yolks in a bowl, add the sugar and whisk until the mixture is light and creamy.
3. Mix in the cottage cheese.
4. Sieve the flour, baking powder and salt into a bowl then stir into the cheese mixture. Fold the semolina and lemon rind in.
5. Whisk the egg whites in a separate bowl until stiff, then fold into the cake mixture.
6. Pour the mixture into the prepared tin and sprinkle the raspberries over the top along with the caster sugar and almond flakes.
7. Bake in the oven for 1 hour (because mine was smaller it took 40 minutes)


I twittered about how I've been blogging too much cake lately and worried that you all think I ONLY eat cake so I'm going to blog a few non cakey things this week to try and convince you!
Posted by Ruth Strong at 09:00