Creamy pasta with mushroom and bacon

When the cat's away the mice will play... apparently!

Regular readers of this blog will know my husband is a rather fussy creature when it comes to food. So when he tells me he won't be home for dinner or won't need dinner made for him I get rather excited thinking about what I can have that's usually off the menu when he is around.

Today was one of those fun days. I had all sorts of ideas about toad in the hole, chicken and broccoli bake, baked fish, sticky chicken wings and so so sooooo much more. The dentist interrupted most of these plans by numbing my mouth in order to work on a tooth that has been keeping me up the past 4 nights - I can't complain really because my tooth feels so much better already! I had a flick through a Christmas present again, Tana Ramsay's Real Family Food, and spotted her pasta with mushrooms and bacon recipe and decided that was the way forward - easy for the slightly gummy eater to enjoy

This was a great dish, also quick and easy to throw together for a weeknight meal - it's a pity the hubster won't like it! While I was making it I wondered was it like the Spaghetti Carbonara and while similar this recipe was much simpler in preparation but had better flavour. 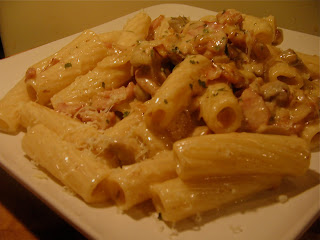 
Recipe
1. Put a saucepan of water on to boil for the pasta and follow packet instructions.
2. Heat the oil in a pan, then fry the bacon pieces. After a couple of minutes add the onion and garlic and fry until the onion starts to colour.
3. Stir in the mushrooms and cook for 2 minutes, then add the wine and simmer until almost evaporated.
4. Add the cream and gently simmer for 3-4 minutes.
5. Drain the pasta and return to the saucepan. Mix in the sauce and parsley, then serve with grated parmesan on top. 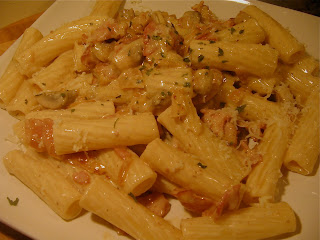 In other news, the Irish Blog Awards 2010 have now opened nominations and will be closing them on 5th February, so get in there and get voting regardless of whether you're in Ireland or not!
Posted by Ruth Strong at 21:00